This is Izzet Staticaster, one of 5 pieces from me in the Return to Ravnica MTG set. 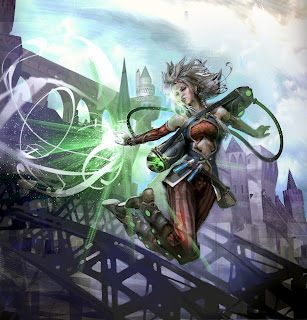 Like the others of this series it had simple origins in what I call a Lasso Tool Shape sketch. So I really didn't draw anything in the usual sense of using line. Rather, I made shapes and filled them with flats and gradients. What this did was let me not get wrapped up in the details too soon. But I was tight on Sketch deadline and threw some random bridge/industrial junk in the background, cause I had no idea what I was going to do with it yet. But it set the mood. 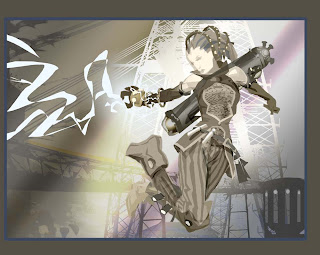 I call this next image a 'midstate', now, but at the time I thought I was just about finished! There were many more hours to go though. After a pretty thorough crit by some trusted peers, I had to dig back in to get it to where you see it at the top. Once again in this version and the final image, the program 'SketchUp' was helpful to get the background. I have always been a reference Frankensteiner, a face from here, a hand from there. I realized with sketchup I could do the same thing. A bit of this building, a tower from here, a flying buttress from there, merged with drawing out of my head to bring it all together. Sketchup won't give you all the answers, but it will give you a heck of a platform. Playing with Sketchup took the backgrounds on these cards further than I ever had before. 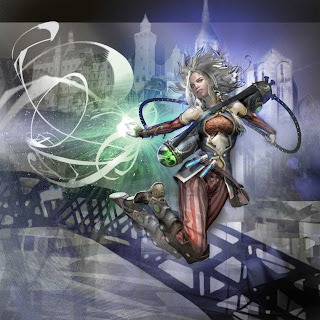 And here is a detail shot of the face. Some neat loosey-goosey stuff happened in the painting of it, and I resisted the urge to go in and overwork it. Sometimes you just gotta let the stroke be the stroke. 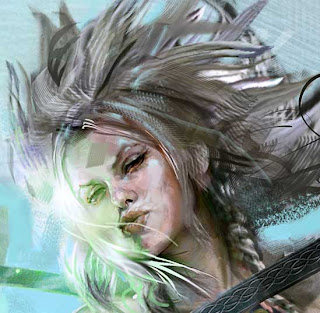