Showing Juno- the whale, my sketchbook

The other day we took a spontaneous family day-cation to the fantastic Mystic Aquarium in CT. Naturally, I brought  my sketchbook with me to draw some of the super-cool critters swimming about. For the fun of it I showed the penguins a drawing I had done of them, which they looked at for about a second and swam on. (Not big art fans.) But later that day I found the biggest (physically) art fan I have ever met in Juno the Beluga Whale. I showed him my sketchbook.

What happened next is a moment I will never forget. Juno studied and observed the sketchbook with me for a hour! He would turn his head with the page flip, focus on the things I was pointing too. He wanted little to do with anyone or anything else but the book. Woah. To say it was a bonding moment is an understatement. (Or maybe it was just my moustache?) 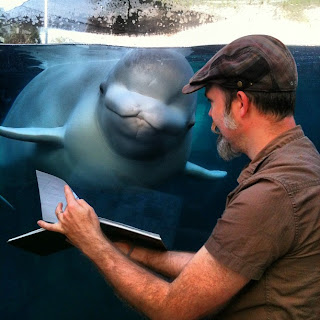 Thankfully, pal and kids book dude Tony DiTerlizzi and his fam were with us on the family day-cation and he shot some video of the moment. To our surprise, I guess it has received a few hits on you-tube! You can see the video here:

Everyone keeps asking what Juno was looking at in the sketchbook. My sketchbook is a chaotic catch-all for the stuff that falls out of my brain- from Children's book ideas (Yup there is a whale one brewing.) to a visual daily diary. So Juno was soaking in a lot of info! I am working of a drawing of him that is not finished, but here is one page he was looking at. These were drawings I was doing at Mystic that day. (More sketchbook entries can bee seen in earlier entries of the blog.)

Guest sketchers, Sarah (Age 9) and Sophia (Age 5) helped me out on this page. 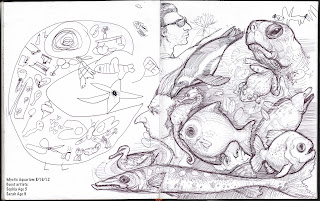