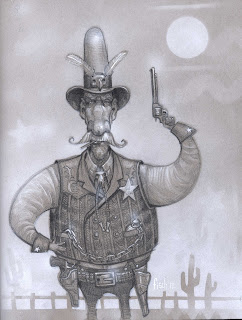 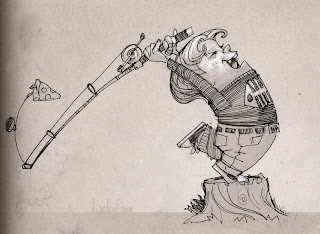 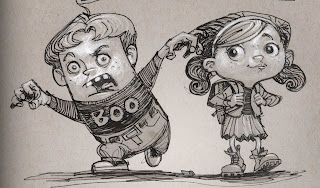 Breaking out the air brush only to use it in my sketchbook felt a bit extravagant (Not to mention cutting the stencil), but one must chase the whims sometimes.

'Da Law' is Graphite, chalk and airbrush in toned sketchbook.

Plus some more random Character Development.

Posted by Scott M. Fischer at 7:54 AM No comments:

Man I have to say I appreciate having a blog. It gives me an outlet to post sketches and ideas that I wouldn't have normally put on the website.

Like this portrait of best bud and uber creative, Tony DiTerlizzi. 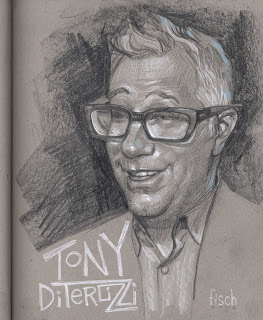 Then there is this fun drawing I did of my buddy Eraklis Petmezas 's character Mr Lune. Such a fun design. 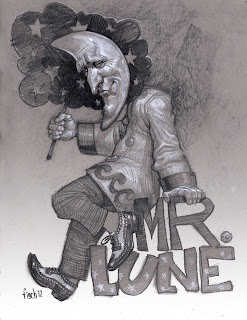 And then finally for the day, I have been a bit obsessed with noses, and in this case the nose knows, you know? 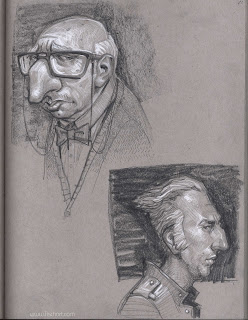 I had-had-had to draw Nate Silver. I love this guy. Like many artists, I was considered a total nerd in middle school, to the point that when it was Girls-chase-Boys Day on the playground, literally one girl stopped me cold and shouted in my face "We're not chasing you dummy." (In reality they were chasing 'Greg' with the feathered hair. Greg, the one cool guy would let me loiter in his shadow. I was just running along for exercise I guess...)

I stink at math so it makes little sense, but after the pundits attacked Nate's blog, I felt this total self vindication on election day- when he nailed it! Like many I had his electoral map open to check every time a state went red or blue. Nate is about as cool as it gets to me. 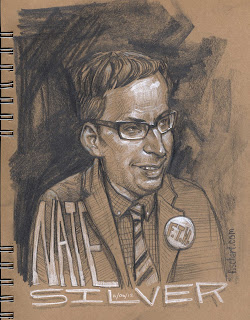 Inspired by Wreck It Ralph, I felt like drawing my own characters that could live in a CG animated movie as potential bad guys. If any studios are looking for a guy to draw cool character heads all day, give me a shout. I don't think I wold ever get tired of doing these. 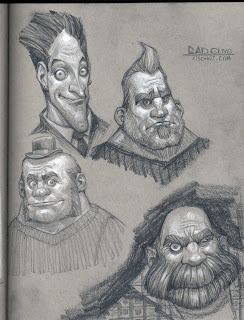 Then I wanted to see if I could get a similar look of graphite and white chalk on toned paper in a virtual program. So launched Art-rage and went to town. It is a great program and should be in every illustrator's toolbox. 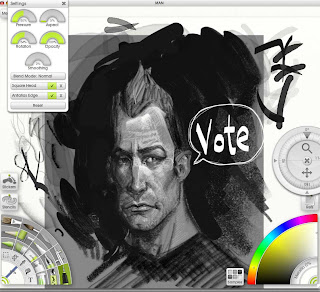 And finally for this post, here is a little thing. I am doing a novel cover where an object will be the main focus, not a figure, so I used the fantastic (and free) program Alchemy to concept out some cool dagger shapes for the Art Director to choose from. If you haven't used it, Alchemy is a program that lets you design largely with abstracts so you can arrive at very interesting shapes. Most of these were created with 'mirror' turned on so I could design one side of a centerline and it would do the same on the other. It has NO save feature, and no Un-do, so you have to make hard decisions and cross your fingers your next move doesn't mess the whole thing up. I like this aspect of the program a lot actually. (But in the end you can export a file for photoshop to work on top of.) It is amazing if you are a shapist. The AD went with 'F' which was my fave as well. 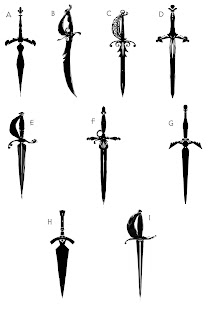 Wreck-it Ralph, Self portrait and some doodlin!

Wreck-it Ralph was so great I came home from the theater and draw a pic of him immediately. Even if you  don't have kids, if you were kicking it in the 80's you HAVE to see this flick! Bravo to all involved. 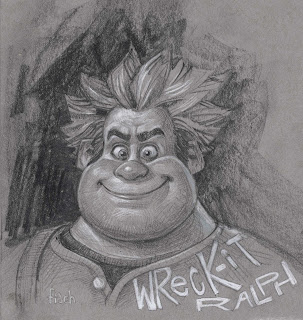 Then I guess it was national Self portrait day according to all my FB art friends. I was a day late but did a drawing of myself, (which my wife thinks looks like a combo of me and Greg Manchess. Who is a handsome devil, so I will take that!) I actually did two, first one by looking in a mirror, which sucked in the end, so I drew this one by referencing that one and stylizing it more. My friends say to draw in a cigar and call me Castro. (Note the stache does this, 'happy one side/ sad the other side' thing all the time. 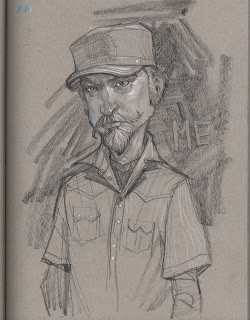 Here is another little head for no reason. 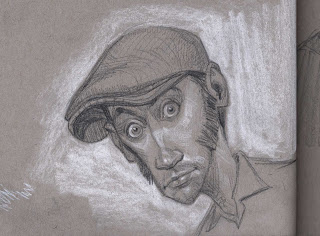 And finally a drawing loosely based on artist friend Bruce Jensen's FB profile pic. But, while a fun drawing in and of itself, I could have done better on the likeness! 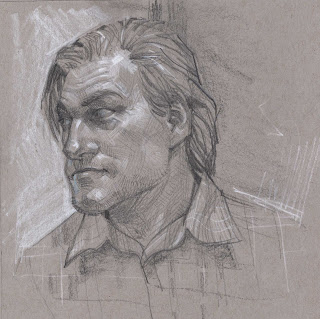 That is all for now folks, pick up a pencil and DRAW SOMETHING!
Posted by Scott M. Fischer at 7:51 AM No comments: